When you're writing history, perspective can be hard to come by. You're in the midst of the magic, after all.

So you can excuse Helen Wright and the dynasty Alberta Pandas rugby team for not knowing the magnitude of what they were doing between 1999 and 2005, as they helped build university sport and the game's future leaders.

"You don't think about that when you're in the middle of all that energy," said Wright of realizing how special those teams were.

"On any given day anyone can win, but for us it was about how you performed, how you played as a team. It's lovely when everything that you think might work actually works."

An inductee in the Canada West Hall of Fame last year, Wright led Alberta to five consecutive conference and national titles, as the Pandas emerged as the sport's dominant program after rugby 15s was added as a CIS sport in 1999.

"A group of people get together and everyone is following their own passion, share that passion, and then all of a sudden the best of everybody comes to the top and least of everybody doesn't even get noticed. That's what it was. It was just absolutely a magical time." 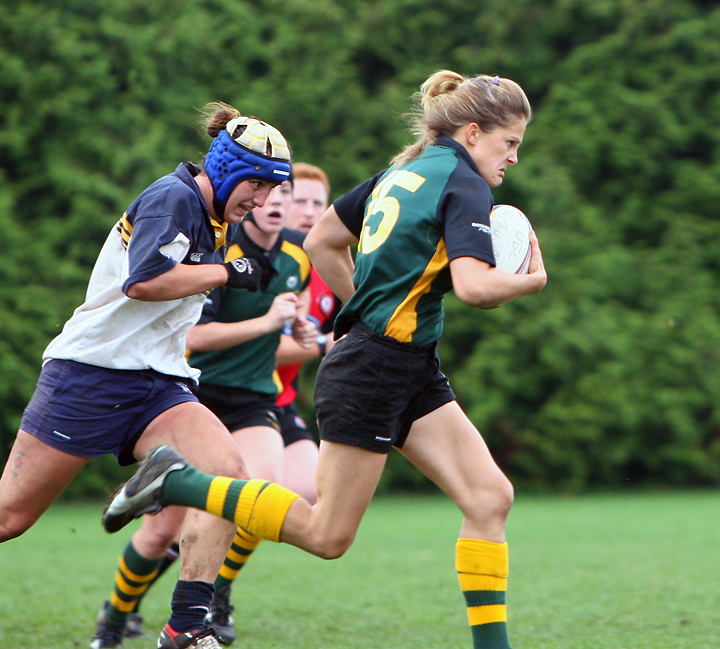 As with virtually every dynasty, there were big names leading the success on the field.

Those names were just part of a program that created a culture of success from day one.

"Rugby is a medium. All sport is a medium, so it was our intention to use this medium to gather these young women together and just give them the hint of what's possible if you put in strategies, practice, and enjoy it. Everybody bought into that energy - the 'we create good people' energy," explained Wright.

"It was like a fall forward kind of philosophy. We said off the get-go 'we have no idea who we're playing, or what they're doing.' We had no idea about the opposition, so we're just going to play the way we play."

And play they did. Better than anyone else, including at the first national tournament in 1999, when their bruising approach was on full display - much to the delight of the Pandas.

"When we went to our first national championship, somebody had painted something on the side of the wall that said '1,000 pounds of Alberta beef,'" recalled Wright. "And the girls looked at it and the they went 'is that right?' And then they started doing the calculations, and they just thought that was wonderful and they went 'we actually have more 1,000 pounds between us!'"

The legacy of the early Pandas teams lasted long past Wright's time with the program, carrying on with head coach Matt Parrish who took over following the 2003 season and extended Alberta's Canada West title streak to seven with wins in 2004 and 2005.

While the success on the field has stood the test of time, so too has the impact those Pandas teams continue to have on the sport of women's rugby.

"The edict was to pay it forward," said Wright.

"The whole point of the exercise is to enable girls to participate."

That goal of growing the sport and creating more opportunities for girls and young women to participate has certainly been achieved over the two decades of university competition across the country.

"I think if there hadn't been (CIS rugby), evolution would've moved it along, but not with the amount of quality and not at the same pace."

"The creation of that level of play, was just win-win-win in all phases. It was a win for the grassroots clubs, because they were getting their players back now much more skilled, and much more acclimatized to a higher level of play."

All told, it was one of those rare moments in history when it all came together, and wins were coupled more importantly with life lessons.

"Winning doesn't actually win anymore in terms of having players evolve and develop - there has to be more. I think that was the whole philosophy at the U of A. It was based on the player's experience and the players individual development," explained Wright.